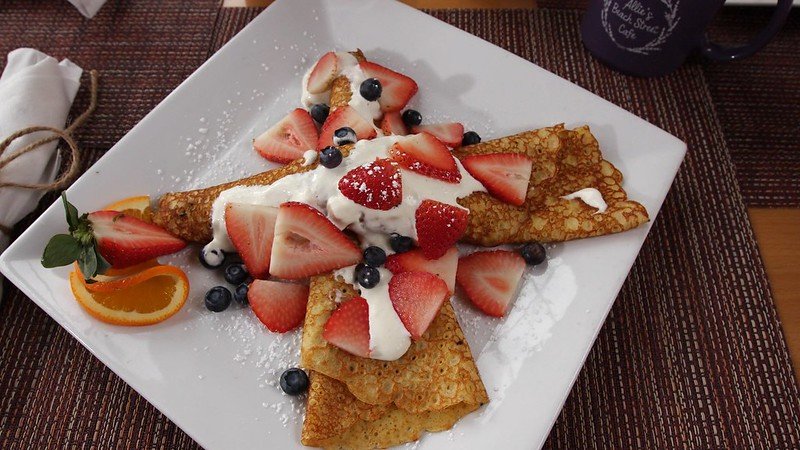 This is Glenn…
And THIS is Allie…

And together they blowing away customers with their cuisine and service in a little spot in beautiful Manchester by the sea.

“We get some strange reactions when people walk in here positive it’s always been like wow I can’t believe there’s a place like this on earth.”

They’re like “this is one of the coolest places I’ve ever been to”. This is a place I would want to go to where it’s, it’s casual, it’s comfortable. It’s literally anything you want. You can find it here.

And you can get it all, morning, noon and night at Allie’s Beach Street Cafe.

Located just off Singing Beach, Allie’s Beach Street Cafe is a French style bistro with New England roots serving breakfast, lunch and dinner.   Glenn and Allie Vargas are the enthusiastic couple behind this local mainstay they recently acquired and put their own personal touch on.

“We want people to have an experience rather than just come in and enjoy their meal, or the glass of wine or the the ambiance.  We want the whole experience to be, you know what Allie’s Beach Street Cafe is.

We created something new and I think we did pretty well at it.

And what they did well was to create a one stop shop for whenever you need to be nourished.

The culinary kismet starts at breakfast where you will find savory Shakshuka served in a cast iron with toast points for dipping.
And the wildly popular, Avocado Toast topped with pickled onions, pico and chimichurri.

“Avocado toast I can’t believe the popularity of this….If we ran out of avocados we’d have to close the restaurant, but I’m the seasoning is a cilantro, jalapeno vinaigrette dressing. Fresh ripe avocado. We put a dollop of pico de gallo on the side….

I can’t believe how good it tastes and how popular it is”.

There are beautiful crepes topped with fresh berries and whipped cream…
and a sweet and salty breakfast sandwich.

“It’s our homemade cinnamon buns. Slice it in half.  A egg over easy. Good homemade rustic sausage links, melted cheese. Top it with a cinnamon. frosting.

The first thing you taste is the cinnamon bun and the frosting on your lips. And behind that you get the fried egg and sausage…. It’s very it’s very good. “

When it comes to lunch and dinner, expect a cross section of New England staples with French classics.
And no French menu would be complete with out a solid French Onion Soup.

“We don’t kid around. It takes us like three days to make our French Onion Soup here.   It’s served classically in a crock with the melted cheese and toast points on top. Soup in first, some crostini and a big handful of Swiss and gruyere cheese on top.  When you bite into the French onion soup, you get the cheese first in your mouth. Hopefully it’s going to burn the roof of your mouth and then you’re going to taste the hot onion broth. You’re going to feel the beef on your lips…and then it’s going to go down your belly, you’re going to be happy for the rest of the day. You know you did something good for yourself when you had a French onion soup.”

We start with a nice blackberry Ham and grill it on a thick sliced brioche. T…. Swiss cheese. We cover it with a Bechemel sauce and a sunny side up egg on the top. So when you cut into it, it just kind of oozes all over. It’s a it’s a real treat.

“I don’t know if it’s so much even the flavors as it is the texture with the smell and the cheese and the egg. It’s just nice and soft and salty. “

Other international sandwiches include this Cuban, stuffed with roasted pork, ham, melted swiss and pickles….
Or this New England twist on a Vietnamese favorite….
And if you want to stay stateside, get you hands on the Beach Street Smashburger…a must have menu item for Glen.

“I wouldn’t trust a restaurant that didn’t have a burger to be honest with you. It’s 80/20 ground chuck. Smashing it thin so it’s crispy on the edges and still juicy on the inside.  It’s got to happen. crispy edges it’s got to be juicy in the middle.  And just a nice buttered bun with a nice a sauce, our pickled red onions it just ties the burger together really well.”

While you are in Manchester by the Sea, the entree section will take your mouth on a world tour with options like the Poisson Rouge; a spicy tomato Boullibase loaded up with local haddock, vegetables and fried plantains. This Caribbean style Bouillabaisse chock full of Scallops, Mussels, Haddock in a Creole Broth.  And a satisfying Wiener Schnitzel.

The wienerschnitzel is just one of my favorite dishes.    We pound it out about the size of a dinner plate.  I’s nice and crispy. Serve it over a pile of herb french fries. Little bit of arugula on the side. .I like to put an egg over easy right on the top of it so when you cut into it.  It makes an instant sauce right over the the schnitzel and it really does melt in your mouth.

“It’s a pound and a half lobster out of shell. It’s baked in a cream sauce with potatoes, peas and vegetables. Classic Ritz crackers on top. It doesn’t really get much better simpler than that. It’s hot and gooey and you know mouthful lobster be pulling out big pieces of lobster claw out of. It’s wonderful”

And just as wonderful are the desserts at Allie’s, including their Ombre Cake.

The the raspberry ombre cake. That’s such a great one. People love the way it looks. You know? It’s huge.  It can feed a table.  So It’s always an eye catching and bring one out and before the night ends, you’ll be bringing it out because everybody else is already eyeing it while they’re waiting for their dinners.”

They’re surprised by the level of food service which is you know, been a great sort of source of pride and pride to me where you can still get an omelet you can still get a bacon egg and cheese sandwich a cheeseburger. But if you can get a Croque Madame, Beef Bourginoun. Our soups are all made from scratch. We have a nice organic Coffee program lattes and baked goods for just casual people want to take out something with them.  We have a nice bar ….you know craft cocktails. My specialty is wines and we have a good old world wine list.   But the New England Cafe is basically of classic French bistro. If you think about it, it’s just a place where you just stop in you don’t see TVs on the walls there’s no How should you say it’s a place to just stop and chat and and have a bite to eat and drop in your neighborhood. And I think….They’re usually taken by the the people here who are genuine I mean we have a genuine approach of.”