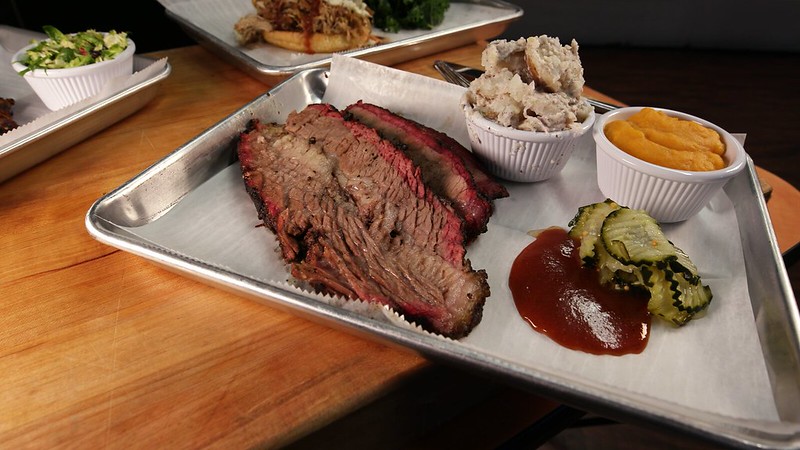 The reason you’ve never heard of it before, is because chef and restauranteur Avi Shemtov is creating a whole new cuisine.

Avi Shemtov – Chef/Owner, A la Esh: “There isn’t Israeli barbecue. That’s not a thing. It doesn’t exist in Israel. So for us, calling it Israeli inspired barbecue is a tongue in cheek way of pointing out that we’re inventing a cuisine.”

And that taste of something new is waiting for you at A La Esh. Brand new to Sharon Massachusetts, A La Esh is an unassuming little spot serving up food that’s big and bold. You see, Avi owns the modern Israeli restaurant Simcha right next door, and believes many of the same Middle Eastern flavors coming out of that kitchen could be applied to all-American barbecue too. And while that may sound a bit strange, Avi insists the cuisines have plenty in common.

Avi Shemtov – Chef/Owner, A la Esh: “In any true fusion, I think you find things that already mesh, and then you try to illustrate as a chef, why they make sense together. So for us, this really wouldn’t work if American barbecue spices aren’t so entangled with Israeli cuisine already. So there’s things like cumin and cayenne, there’s also honey and honey is something that we use a lot in Israeli cuisine. We’re adding things like sumac and clove, nutmeg, cardamom. So these are things that like the traditional American barbecue fare isn’t really leaning on that we are leaning on.”

And Avi is leaning on an award-winning team to help bring this culinary mashup to delicious fruition.

Avi Shemtov – Chef/Owner, A la Esh: “Brendan Burek, who is in charge of the barbecue aspect of our menu, definitely is a classic barbecue guy. Myself and my co-executive chef, Kyle Crusius, we definitely are bringing an Israeli influence. Nobody has done this and the three of us are really uniquely situated to bring this cuisine to people.”

The menu at A La Esh has three main offerings: Smoked meats that lean towards traditional barbecue, sides that showcase more Israeli flavors, and Sandwiches that mash it all together.

But let’s start with the barbecue.

Avi Shemtov – Chef/Owner, A la Esh: “If you love barbecue, it’s amazing barbecue. So if you’re really stuck in your vanilla ways, and you’re like ‘this is what I want’, we’re not going to disappoint you. The briskets are amazing, the ribs are great, the smoked wings are great. All the things that you’re just used to getting in barbecue we have and we have them fantastic.”

The Ribs are dry-rubbed with plenty of paprika, and finished with a honey and vinegar glaze, the Pulled Pork is melt in your mouth tender, and the smoked Turkey Breast is kicked up with shawarma seasoning. But the Brisket is definitely the star of the show.

Avi Shemtov – Chef/Owner, A la Esh: “Brendan’s brisket is unbelievable. So we don’t play very much with the brisket recipe. It leans on black pepper, which I think is perfect for beef. There are other warming spices in it. It’s got a sugar component to it. Obviously a beautiful smoke ring, a nice little bark on it.”

And while some people are partial to a leaner cut of brisket known as the flat, Avi prefers the fatty goodness of a piece from the point.

Avi Shemtov – Chef/Owner, A la Esh: “So someone who’s really is into it, and gets it, wants this piece. So there’s your flat, there’s your point, that’s fat, that’s Texas barbecue right there, is in that slice. This has everything I’m looking for. This is perfect. That makes me happy.”

When it comes to sides, that’s where the Israeli flavors have a chance to shine.

Avi Shemtov – Chef/Owner, A la Esh: “On the sides, that’s definitely where we want to give you a different eating experience. So for us like we don’t make a traditional coleslaw we shave brussel sprouts, and there’s always like a tangy fruit of some kind in there. We do a mac and cheese but it’s out of Israeli couscous, so it’s really still pasta. The mouthfeel is so different and it takes cheese sauce very differently because it’s little and it sort of spongy. So it’s almost like a mix between risotto and macaroni and cheese. Our potato salad which Kyle has masterminded has sumac in it and pickled onions that just like really introduce a beautiful acid to a potato salad that I think a lot of times can be really one note.”

And instead of boring old baked beans, Avi make a version known as Chamin Beans.

Avi Shemtov – Chef/Owner, A la Esh: “Here we make a mixture of Northern beans and red kidney beans. And then we add jalapeno and onion and a lot of our spice blends and then we do sweeten it up at the end a little bit. And I’m really confident that like when people come in here and they have our Chamin beans, they experience really what they wish baked beans could be.”

As for the sandwiches at A La Esh, the Grilled Rachel is the one to order, because the house smoked pastrami here is next level.

For dessert, there are gourmet donuts fresh from Union Square Donuts in Somerville. And if any are left over at the end of the day, Chef Kyle turns them into creatively delicious donut bread pudding.

Kyle Crusius – Executive Chef, A La Esh: “I’ll cut them up and I make a custard, and I throw that together into bread pudding and we’ll play with the flavors. One of the ones doing very well is like our Double Chocolate Nutella. It’s just like chocolate pudding, custard, and pieces of donut. It’s amazing.”

And it’s a sweet way to reward yourself for trying something new.

Avi Shemtov – Chef/Owner, A la Esh: “If you’re looking for something that you’ve never had before we’re the only ones doing what we’re doing. And to me I think you’re gonna leave here really excited and happy about a brand new cuisine.”